As the nation celebrates its 62nd year of Independence this year, Jacob’s, a biscuit brand under snacking powerhouse Mondelez International, aims to put a spotlight on some of Malaysia’s greatest icons in recognition of their accomplishments in being the first, the best, and the original of their crafts.

The late Tunku Abdul Rahman Putra Al-Haj, the Father of Independence; the late Tan Sri P Ramlee, the silver screen legend; and Datuk Nicol David, the greatest woman squash player of all time, are some of the many iconic figures who have inspired Jacob’s to embark on its The Original Cream Cracker Celebrates Original Malaysians campaign in conjunction with Merdeka.

“Jacob’s biscuits have been in Malaysia for 66 years, even before Malaysia gained its Independence in 1957. Because of its long-standing presence in Malaysia, Jacob’s has always been known as the original cream cracker by consumers. The way we manufacture Jacob’s crackers may have evolved over time, but the one thing that has remained the same is its original recipe and distinctive taste, which our loyal fans know so well,” said Raja Zalina Raja Safran, Head of Corporate and Government Affairs, Mondelez International (Malaysia).

“Jacob’s The Original Cream Cracker Celebrates Original Malaysians campaign is our way of celebrating the rich history of our nation and looking back upon what has been accomplished thus far. This Merdeka, we could do with more of such reminders about all the things that make Malaysia great!” added Raja Zalina.

The campaign will feature 8 inspiring and original Malaysian personalities who are legends in their own fields :

2. Tan Sri P Ramlee
Regarded as a national treasure in the local entertainment industry for his contribution to the movie and music industry, and literary works.

3. Datuk Nicol David
The best squash queen who is well known for being the longest reigning world squash champion and for bringing squash to the international arena.

4. Bram Lee
The first Malaysian YouTube star to hit 1,000,000 subscribers, and the original young figure in the field of social media.

6. A Chandramalar
Also known as the Woman of Steel, she was the first Malaysian trailblazing policewoman to head the Anti-Vice Branch in Penang.

7. Marina Ahmad
The Mount Everest conqueror, she was the first Malaysian woman to reach the summit of Mount Everest.

8. Yaashwin Sarawanan
The Human Calculator and youngest personality on this list is being celebrated as the first Malaysian to emerge runner-up on ‘Asia’s Got Talent’. 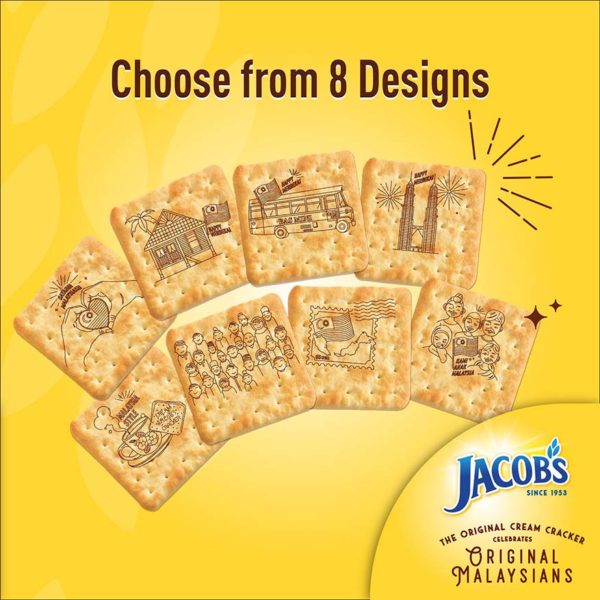 At retail level, the Jacob’s Original Cream Cracker are sleeved featuring some of the Original Malaysian icons, namely Tuanku Abdul Rahman, Tan Sri P Ramlee and Datuk Nicol David. These are available on both the tin and the pack. Consumers will be able to own a personalised cracker souvenir as they select from 8 specially crafted Malaysian-themed crackers. They will also be able to witness the engraving process of the personalised cracker. This can be experienced at selected AEON, Tesco, Giant and Mydin retail outlets around the country throughout the campaign duration.

“We are truly honoured to be associated with these Original icons who are also original in their own way. Their passion and commitment continue to inspire us to be proud Malaysians,” commented Raja Zalina. The campaign, which kicked off in August, will end on Malaysia Day (16 September).